Sailing in Tasia with Alan & Sinbad we had left Shotley at 4 o’clock in the morning bound for the Crouch & Burnham Yacht Harbour to take part in the first Dallimore Rally. The sky was grey, the wind moderate and cold, the sea lumpy. It didn’t feel like summer, could it be my fault for making a sun awning for the boat?

Arrived at Burnham in the afternoon on the flood and tied up in the marina, followed half an hour later by Priscilla, sister ship to Tasia, owned and sailed by a charming young Dutch couple, Nico and his wife Elyn, very smart she looked too. They tied up next to us and we introduced ourselves. Betty Dallimore, wife of Ted Dallimore came down to the boat and welcomed us to Burnham. Two more Dallimore boats arrived Airlie 100 years old, beautifully maintained and once owned and sailed by Norman Dallimore around 1910, now owned and sailed by Robert Berk and crewed by Lena Reekie. Lisbet, owned by Viktor Prior and his wife Gill, had come all the way from Beaulieu with their boat on a trailer. We of course walked along the jetty to admire the boats and chat with the owners. Hoping for more boats tomorrow and an improvement in the weather. Early night. 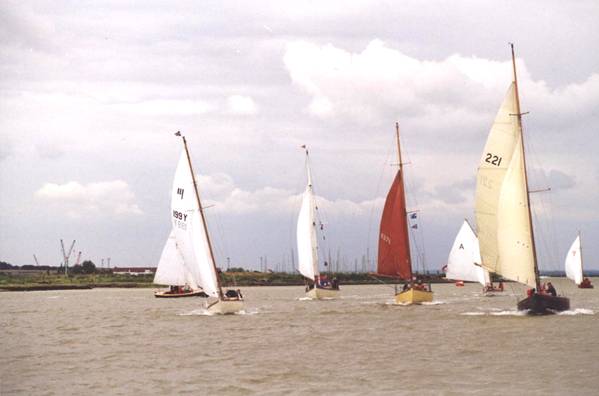 SEVERAL PARTICIPANTS DURING THE SAIL PAST 2000

On my way to the showers I watched the mast being put in John Ridgeway’s boat. Shopping and socialising with our new friends during the morning. Ted Dallimore came down to tell us he would be picking us all up and taking us to dinner at their house at about 7 o’clock. There we met his son Will and his wife Carol and the children. The whole family could not have been more kind and welcoming. We enjoyed a lovely dinner and non stop stimulating conversation.

The Dallimores have records going back to the turn of the century, lots of books and pictures of great interest. Coming back aboard Sinbad climbed on the boom and surveyed the night while we drank our cocoa in the cockpit. Several times I woke to hear the wind shrieking and howling and halyards beating a frantic tattoo.

I needed my snug and woolly hat on to walk to the showers (mid summer?).

Ah!!! Another Dallimore coming in Bandor, a really beautiful boat and the biggest one here, fabulous condition. The owner Sean McMillan had made a very fast passage from Levington sailing single handed with the lee rail under most of the time. He was wet and cold especially around the legs as he had forgotten his oily trousers. Tied up and into dry jeans, he come and had coffee and croissants with us and warmed up and stayed to chat for an our. The other Dutch boat Phynella didn’t arrive due to bad weather, but the owners Mark and Rose did, by ferry. Two or three other boats were deterred by the weather from coming. There is a small fleet of Dallimore open boats at Burnham which are raced enthusiastically and these should swell the numbers.

Woke to the sound of rain.

Breakfast and a quick tidy up before the photographers arrived.

9:15 the owners and their boats had their pictures taken with the Dallimores. Sinbad also came in for a lot of attention and posed for pictures. The next part of the program was for the boats to sail out into the river sail past the Commodore’s boat and dip the flag. It was very windy. We reefed the main and put the small jib on, Betty Dallimore came with us in Tasia. The five larger boats sailing in line went first, then the five open boats. There was a good bit of jockeying about and jilling around. We did the sail past three times, firstly to get it right, secondly to do it properly and thirdly for the official photographs, then back to the marina, but before we got there we had to weather a vicious squall. We had just dropped the main and put the engine on. We got tied up with a little difficulty but we all helped each other.

Drinks and lunch with Nico & Elyn in the cockpit under the tent. Nico had to make a quick dash into Maldon to buy a jacket, he not having realised it was a blazer and tie job in the evening. We got dressed up in our party gear and very smart we all looked.

Drinks first at the Dallimore’s house then on to the Royal Burnham Yacht Club. The dining room tables were beautifully dressed, the room itself was very attractive with large oil paintings and carved wood giving a general atmosphere of history. The wine flowed freely and the food was delicious. Lots of jollity and funny speeches and thanks yous to the club for its hospitality, to the Dallimore family for their kindness and hard work in arranging everything, and to Nico for the original idea and with help from Alan in bringing it out.

This was open day, anyone and everyone was invited to come and visit the boats. We had fun stringing the flags together to dress Priscilla and Tasia over all. Tea, coffee, wine, nibbles and biscuits were got out in readiness for our visitors. At 10 o’clock they started coming and there seemed to be a never ending stream until 4 o’clock. Everyone was very enthusiastic about the boats and Sinbad was much admired and lapped it up. Bandor and Airlie left about lunch time, it had been nice seeing them. We had a pleasant informal dinner in the evening with Ted & Betty and Nico & Elyn. I felt tired after a long day and slept late the next morning.

During the morning we, along with the folks off Lisbet and Priscilla had coffee on Ted and Betty’s boat. We said our goodbeys and then we were off. Wind south 3-4, blue skies, little fluffy clouds, lovely. Down to the Withaker, up the Swin and into the Blackwater, Bradwell at 6 o’clock a balmy evening, peaceful anchorage.

So, did we enjoy the rally? In spite of the weather, we certainly did, for the fun, for the good company, meeting such nice people, making friends and just enjoying being part of a successful event. Looking forward to the next one. 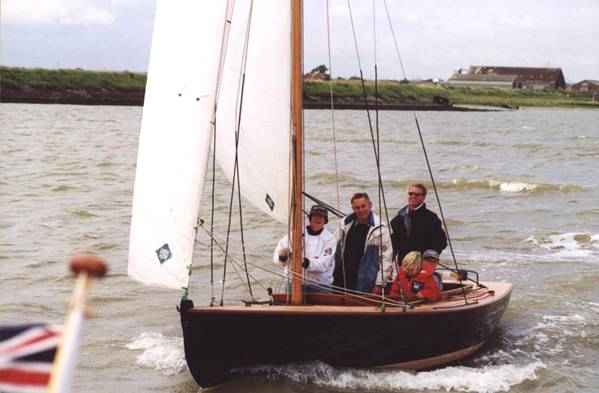 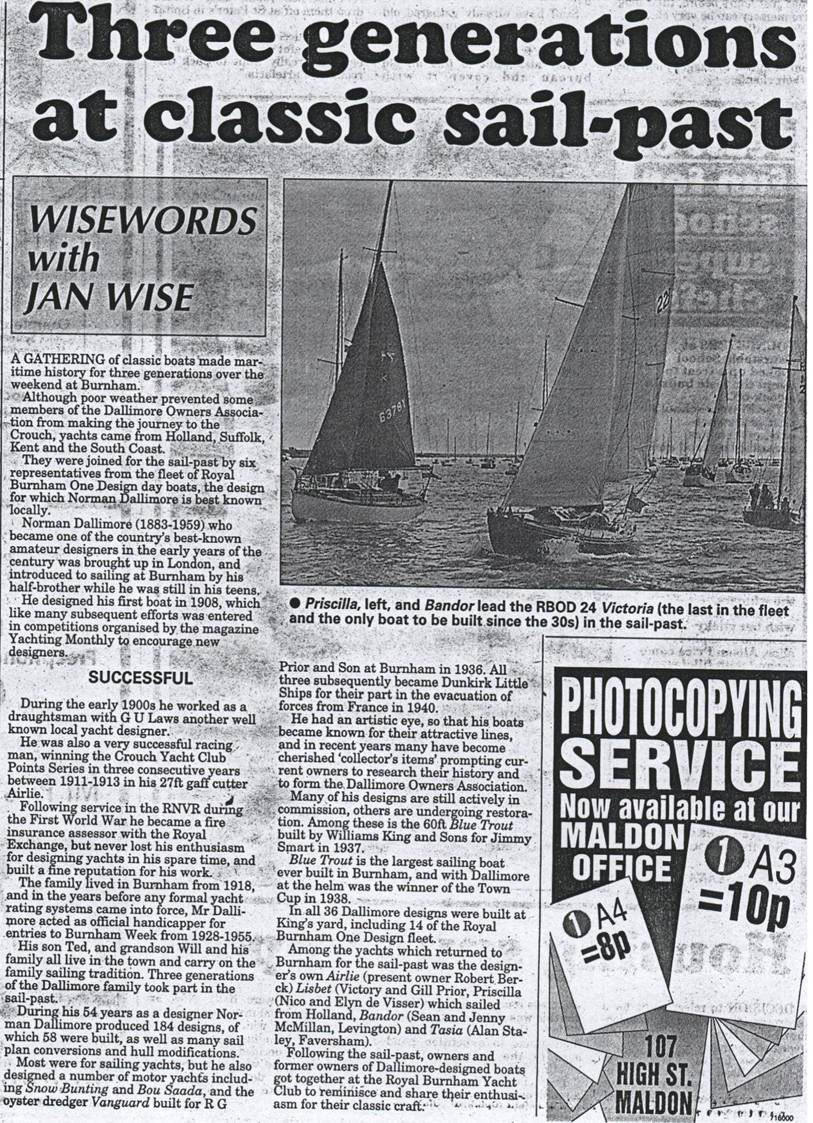